Far left liberals as well as Woke and censor police seem to be on an all-out warpath against free speech, at least the kind of speech that does not align up with their own ideals.

Weekly we are hearing about people, companies, products, and even media (i.e., movies, television, literature, etc.) being “canceled.” I even had my own recent experience of being “canceled” by a long-time friend and industry peer because they disagreed with something I said on Facebook. Really? Yes, really!

I came across this cartoon from A.F. Branco which paints a sad picture of the current state of “cancel culture” in our society. 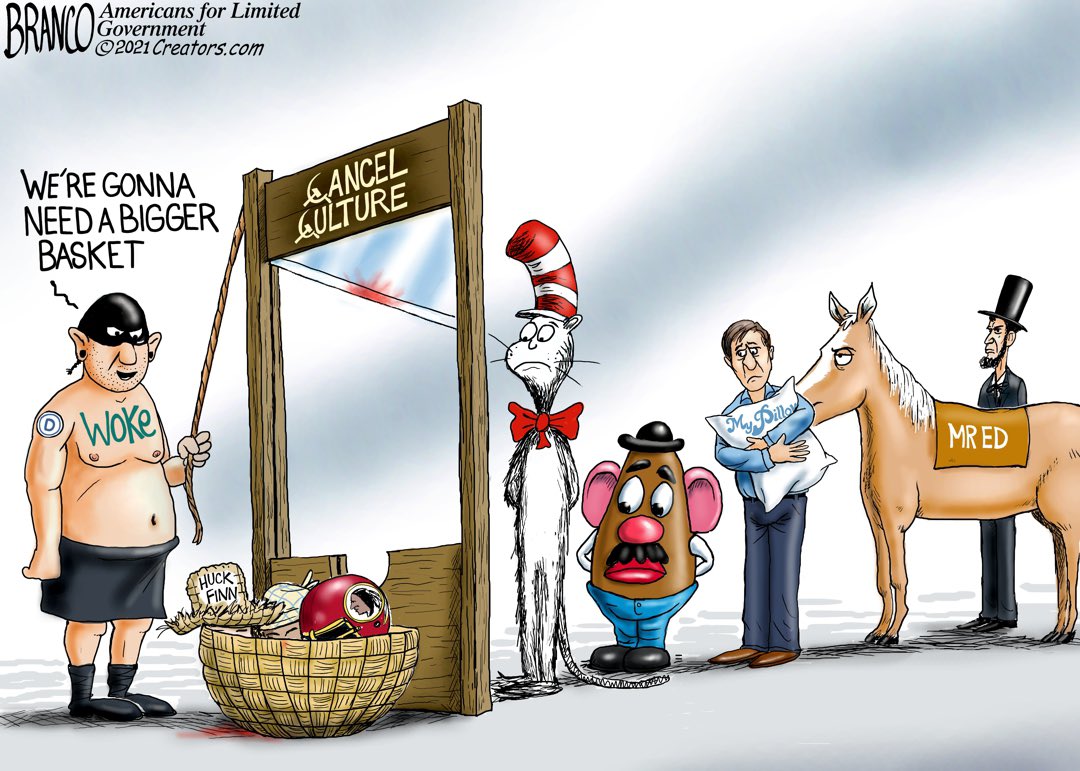 Mmm, I seem to recall another group of people in recent history whom the local governments and establishments tried to cancel. I’m referring to none other than The Apostles.

In the Book of Acts Chapter 4, we have an account of the Apostles, Peter and John, teaching and proclaiming before a crowd of people the resurrection of Jesus Christ from the dead. They were preaching the Gospel, this just after healing a man who had been lame from birth. Unfortunately, the captain of the temple and the Sadducees did not like what was happening and Peter and John were arrested.

And as they were speaking to the people, the priests and the captain of the temple and the Sadducees came upon them, greatly annoyed because they were teaching the people and proclaiming in Jesus the resurrection from the dead. And they arrested them and put them in custody until the next day, for it was already evening.

The story continues in verse 5.

On the next day their rulers and elders and scribes gathered together in Jerusalem, with Annas the high priest and Caiaphas and John and Alexander, and all who were of the high-priestly family. And when they had set them in the midst, they inquired, “By what power or by what name did you do this?” Then Peter, filled with the Holy Spirit, said to them, “Rulers of the people and elders, if we are being examined today concerning a good deed done to a crippled man, by what means this man has been healed, let it be known to all of you and to all the people of Israel that by the name of Jesus Christ of Nazareth, whom you crucified, whom God raised from the dead—by him this man is standing before you well. This Jesus is the stone that was rejected by you, the builders, which has become the cornerstone. And there is salvation in no one else, for there is no other name under heaven given among men by which we must be saved.”

Their response to the Apostles defense is similar to what we are seeing today with Cancel Culture.

Now when they saw the boldness of Peter and John, and perceived that they were uneducated, common men, they were astonished. And they recognized that they had been with Jesus. But seeing the man who was healed standing beside them, they had nothing to say in opposition. But when they had commanded them to leave the council, they conferred with one another, saying, “What shall we do with these men? For that a notable sign has been performed through them is evident to all the inhabitants of Jerusalem, and we cannot deny it. But in order that it may spread no further among the people, let us warn them to speak no more to anyone in this name.” So they called them and charged them not to speak or teach at all in the name of Jesus.

If you’ve read the rest of the account, you know very well that the Apostles did not allow themselves to be canceled but continued to teach and preach the Gospel of Jesus Christ.

What is going on today with all of the “canceling” of people and things is nothing new. What is new and quite sad is that it is happening in the United States.

And if you think cancel culture won’t come to the Church and Christians, you are living in a fantasy land. They are coming for us next! In fact, they already are. I’m already seeing talk related to Christian ideals and values being associated with hate groups and hate speech.

When it happened to the Apostles, they ignored the cancel police. What was the outcome of their courageous actions? The church grew!

When they were released, they went to their friends and reported what the chief priests and the elders had said to them. And when they heard it, they lifted their voices together to God and said, “Sovereign Lord, who made the heaven and the earth and the sea and everything in them, who through the mouth of our father David, your servant, said by the Holy Spirit,

“‘Why did the Gentiles rage,
and the peoples plot in vain?
The kings of the earth set themselves,
and the rulers were gathered together,
against the Lord and against his Anointed’

for truly in this city there were gathered together against your holy servant Jesus, whom you anointed, both Herod and Pontius Pilate, along with the Gentiles and the peoples of Israel, to do whatever your hand and your plan had predestined to take place. And now, Lord, look upon their threats and grant to your servants to continue to speak your word with all boldness, while you stretch out your hand to heal, and signs and wonders are performed through the name of your holy servant Jesus.” And when they had prayed, the place in which they were gathered together was shaken, and they were all filled with the Holy Spirit and continued to speak the word of God with boldness.

Whether it be the Gospel, Dr. Suess, Mr. Potato Head, the MyPillow guy, or whatever is next on the horizon for cancelation, we cannot let the far left liberals as well as Woke and censor police win this “cancel culture” battle. America is built on free speech and the free exchange of ideas. May those of us that love freedom always fight, as the Apostles did, to not be canceled!