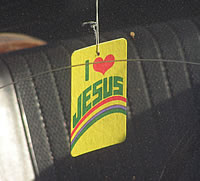 There is a new television series airing in the United Kingdom this month that aims to challenge non-believers to become Christians through a number of Bible studies and mentoring from an ecumenical team of church leaders. Thirteen people in all will volunteer to give up their normal lives and attempt to live like Christians.

The “Make Me a Christian” cast includes an atheist, an unmarried couple with a child on the way, a lap-dancing manager, middle-class parents who are so busy that they have hardly any time for their children, a man in his 20s who goes out every week drinking and womanizing, a Christian-turned-Muslim, and a lesbian.

The series documents the changes that occur within each of the participants as their perspective of Christianity and the meaning of life are challenged by the lessons that emerge from the Bible studies. By the series’ end, some participants even make a commitment to pursue Christianity further.

The Rev. George Hargreaves, leader of the Christian Party, and his team of mentors think Britain is in a state of moral decline and aim to show that a return to a more Christian way of life would stop the rot, according to Channel Four. Other mentors on the show include Church of England Curate the Rev. Joanna Jepson, Catholic Fr. John Flynn, and Kensington Temple’s Pastor Wale Babatunde.

While Christian instruction is great, transforming these people’s lives is going to take an encounter with the living God. From the series web site, it seems as if the team of mentors is using “Christian instructions and moral teachings” in an attempt to change behavior. However, what they should be doing is to introduce these people to Jesus Christ so that their lives change from the inside out.