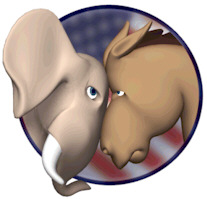 In the past, I have never devoted much of my time to politics. In fact, in my younger years, there was pretty much no time in my life for such things. As far as I was concerned, politicians were just a bunch of power-hungry, lying thieves who’s decisions only mildly impacted my life. Well, some of this perception still remains to a large degree.

Nonetheless, I have followed the last few elections a bit more closely. In addition, I continue to follow (albeit at some distance) the current political climate. Like a bad tennis match, I watch the Democrats and Republicans bash blame for the economy, unemployment, health care, the war on terror and other political hot potatoes back and forth.

The more I watch all this, the more I can’t help but think of how our government began. Forget all the rhetoric about this nation being founded on Christian principles (to be honest, I’m not sure that’s entirely true anyway). Forget the individual, controversial issues that are burning up the headlines these days. What I think about is the whole concept of the two-party political system we currently have.

When you look back into the short history of our country, you can see that this system worked fairly well for a long time. After all, one party helped to balance out the other in an attempt to make laws that were fair and equitable to people of various backgrounds, religious beliefs, etc. With some exceptions, and this is just my perception, it seems as though both parties historically were quite a bit more moderate than they are today. At least, there was less of a chasm between them.

Sure, they’re probably always been the struggle of liberals vs. conservatives to a degree. But I’m not sure it’s always been done the way we see it today. I can’t help but think that our forefathers fought and argued about what they felt was best for our country and its people as a whole. Today, the parties are drifting so far apart from one another that most of the mud-slinging and arguing that I’m seeing doesn’t seem to have anything at all to do with what’s best for the country or its people. Rather it seems to be more about which party is “in power” and can call the shots.

As a member of either party, one is by and large expected to follow one’s party on important issues and vote accordingly. When I look at the voting results on various bills introduced in Congress or the Senate, it’s almost amusing how you see bills put forth by the Democrats getting 98% backing from their own party and 95% of Republicans opposing…and vice-versa.

Now, I realize that we’re talking about economies of scale here and that the United States is far bigger than any multi-billion dollar corporation. However, I can’t help but think that in these corporations, a group of people from various backgrounds, political ideologies, faiths and values can get together and hash out solutions to problems together but the people we vote into office can’t seem to agree on anything at all! (Ok, not entirely true…there is generally little opposition to naming buildings, honoring specific veteran’s or naming a particular day of the year as National <insert sappy cause here> Day.)

How is it that these two parties have grown so far apart that it is quickly becoming and all-or-nothing thing. Nowadays, if you’re a Republican, you can’t agree with anything going on in the Democrat-controlled House, Senate or White House and if you’re a Democrat you’re in hog-heaven. And if things were reversed, the Republicans would be over-joyed and the Democrats would be crying foul.

Why? Because both extremes, in my opinion, are wrong. And I’m not just talking about hot-topic, social issues that get bandied about. I’m talking about major government responsibilities and initiatives.

I’ll admit (somewhat reluctantly) to being a registered Republican. The reason for that is because I believe in a smaller federal government and more empowerment at lower levels down to, and including, individual citizens. I believe that the larger the federal government is, the more generalized things have to be in order to keep from stepping on the toes of people who have different values. Therefore, I believe the laws should be more localized so that communities who share certain values with one another can make rules that suit them and other communities who feel differently can make laws to suit them.

I believe that a larger federal government either has to be entirely too generic and ambiguous or they have to ignore what should be the rights of a certain percentage of the population to pass more specific laws. Any of the long-debated issues fit in here…abortion, same-sex marriage, capital punishment, etc.

At the same time, I have to admit that de-regulating the banking industry seems to have been a huge contributing factor for the current economic crisis we have on our hands. Other issues could be brought up, too, but I think that one is sufficient.

Lastly, the “Conservative Right” is beginning to get a bit too closely tied to Christianity (sometimes even being called the “Religious Right.”) The reason I have a problem with this is because, as a Christian, I don’t want my witness to be weakened by people claiming Christ and then trying to forcibly push their agenda on everyone else.

On the other side of that, we dohave to be active politically to protect our beliefs from being trampled. It’s ironic that those who oppose Christianity, saying that we are imposing our beliefs on others, end up trying to do the same thing to us. They take prayer out of schools and call that fair. Now, I understand not making people pray…but not allowing them to? Someone please explain to me how this does not violate my right to freedom of religion?

Again, there are many other things than just taking prayer out of public schools. But, I’ve already digressed enough here, I think. So I’d better stop now.

The point, I guess, is that by having all these decisions made by two groups of people who are increasingly opposed to more and more of each other’s values, priorities and perspectives the American people will continue to suffer by being forced to submit to laws that should be made at levels closer to the individual so that communities can live out their collective values with less interference with people of different values.

So, if a small town in Kansas is full of Christ-following, conservative, Bible-believing Christians…well, then if you’re a pro-choice, homosexual porn-actor, it might not be the type of community you would choose to live in. But if you’re that person, there will likely be lots of other communities where those values are accepted and welcomed and you’ll fit right in.

I know. Sounds a lot like cultural segregation. I guess it kind of is. But to be honest, I don’t know that it would ever get to that kind of extreme. But, at the very least, small communities who have predominantly the same view on topics such as same-sex marriage, abortion, etc. can agree that “In our town…this is how things are” rather than a federal government telling everyone that it has to be one absolute way throughout the country and all those who don’t agree with those view need to suck it up and deal with it.

Wow! Kinda went all over the place with that one, I guess. So much for being brief.

Also, before people start flaming me like crazy, I should probably go on record saying that these thoughts were written as they were hatched so no deeper thinking has yet been done as to how some of these ideas would affect our society and such. So, please keep that in mind before you run me through. 🙂